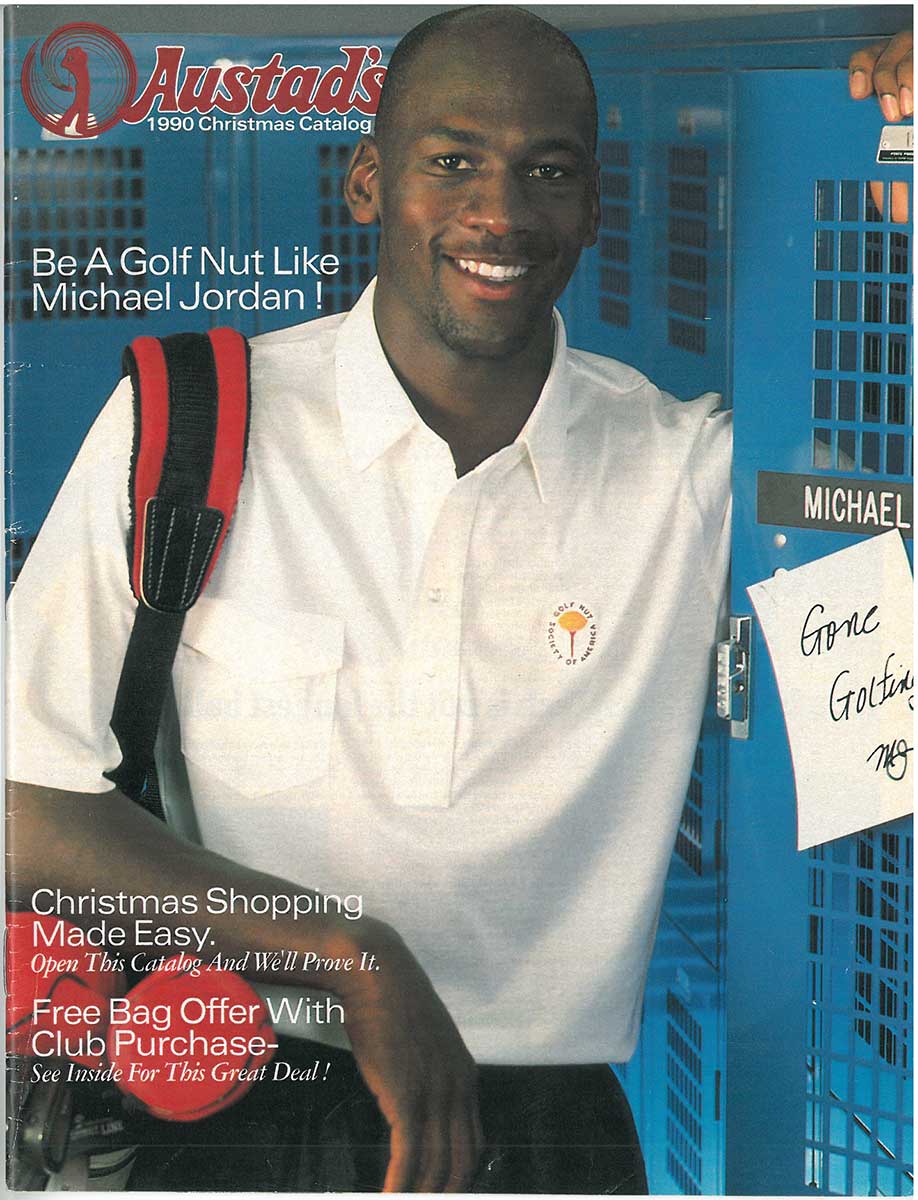 As the creators of the first golf catalog in the world, Austad's has a pretty rich history of interesting cover art. We've featured original artwork, professional models and even Dave Austad covered only by a barrel.  However, we have a handful of covers that are rather legendary.  We pulled in Austad's owner and CEO, Dave Austad, to get the story behind one of his all-time favorite covers - the 1990 Christmas catalog featuring Mr. Michael Jordan.

"To be perfectly frank, we were really lucky to get Jordan," said Dave. "And the best part was that we didn't have to pay a dime for the shot!"

It sounds insane, but it's true.  So how did we score the best basketball player in the world as our Christmas cover model?  Back in the late 80's some guys down in Coral Gables, Florida formed a group called the Golf Nut Society.  Basically you paid a $25 entrance fee and got a monthly newsletter along with membership in a group of like-minded golf fanatics.  I'll spare you the drama and tell you that the society has been defunct for around 20 years now, but at the time, it was growing steadily.

"We were approached by these Golf Nuts who wanted us to sell memberships to their group through our catalog," said Dave.  "To be honest, we weren't totally crazy about the partnership, but we said, Hey - if you can get us your Golf Nut of the Year for our holiday cover, I think we can make something work."  Fortunately for Austad's, 1989's Golf Nut of the Year was a fairly big name and the Golf Nut Society was more than happy to oblige.

They arranged for the photo shoot to occur while Jordan was hosting a kids basketball camp in Chicago.  Dave and a photographer made the trip and waited around for two days until Jordan could find half an hour to take a few pictures.  The shots were taken in a locker room at a small Chicago collage and Dave was uncharacteristically nervous about meeting the basketball legend.

"I was very nervous," says Austad.  "I have gotten to meet quite a few big names and it usually doesn't really affect me, but Michael Jordan was kind of a big deal."

The shoot itself took only 20 minutes or so and the Austad's team had brought a set of Accutech irons, which were an Austad's in-house brand of clubs, for Jordan to pose with.  After taking a look at the irons, Jordan said, "Huh, are these ladies irons?"  A slightly humbling moment for Austad, who still gets a kick out of it to this day.

"All in all, it was a very cool experience.  I ended up getting a nice autograph for my son, Ryan, and we came away with a pretty legendary cover."