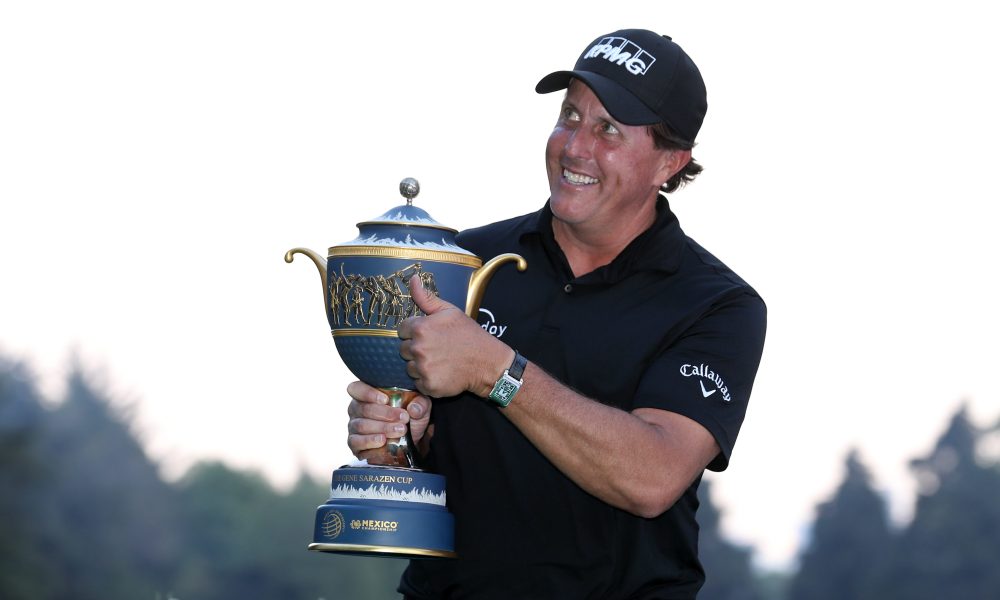 Phil Back on Top

For the first time in over four years (yes, four), Phil Mickelson is in the winner’s circle.  His win at the Mexico Championship ended at 101 tournament drought for Lefty that started after the 2013 British Open at Muirfield.

Phil’s win wasn’t without challengers either.  Justin Thomas, currently the hottest golfer on tour, holed out a 119 yard shot for eagle on 18 to take a two shot lead while Mickelson was on 14.  Lefty pulled through though with a two-putt birdie on 15 and by draining a 20-foot birdie putt on 16 to tie Thomas and push the tournament to a sudden death playoff.  The drama didn’t last too long as Phil made an 18-foot birdie putt to win while Justin Thomas bogeyed.

On a related note: this was the sixth sudden death playoff in eight PGA Tour events this year.  So far this PGA season has been filled with drama and with months of golf ahead, we’re excited to see what happens next week.

Phil’s 43rd career tour victory at the 2018 Mexico Championship was a big one.  He ended a 4+ year win drought and took home a check for $1,700,000.  Unsurprisingly, Mickelson’s bag was filled with Callaway gear.  Here’s what he had in play:

Like Phil Mickelson, Michelle Wie had been on a 4+ year win drought heading into this week’s tournament.  The Women’s World Championship in Singapore was good to Wie and she distanced herself from a pack of three other players in contention on 18 when she drained a 36 foot birdie putt from off the green.

The 28 year old was obviously ecstatic to be in the winner’s circle again, saying, “Winning is everything. I mean, there is no better feeling than when you think you sink that winning putt. It's a high, for sure."

Congrats to Michelle – we’re looking forward to seeing what she can put together this year with her renewed confidence.

Shot of the Week: Justin Thomas Holes Out for Eagle

If you watched the last hour of the Mexico Championship this past weekend, you’ve likely already seen this shot about a million times.  However, it’s impressiveness isn’t diminished upon repeat viewings and knowing that this was Thomas’ last shot of the tourney and one with which he took a 2-shot lead makes it even better.  Check it out: