We strive to show accurate inventory but items do sell out. Please call your local Austad's Golf Store to make sure we have your item.

Not in stock near you? Call your local store and we’ll have it shipped in for pickup within 2-3 business days.

Skip to the end of the images gallery

Skip to the beginning of the images gallery
Details

Extra-wide and gently curved from back to front and heel to toe, the SSW’s sole glides along the turf with silky smoothness. Hit behind the ball and the clubhead will keep right on moving to assure crisp, clean contact – eliminating the ugly fat shots your traditional short irons produce.

The Anti-Chunk Sole also features a series of shallow grooves to reduce friction in sticky or matted grass.

Unlike the sharp edge of a pitching wedge or short iron, the Square Strike’s beveled (angled) leading edge prevents the club from digging. Pair the No-Dig Leading Edge with the Anti-Chunk Sole and, as tester Tony Sodoro said, “You cannot hit this club fat. I tried.”

The Square Strike’s design team moved weight from the heel area to the toe to prevent excess clubhead opening and closing going back and through. Paired with the SSW’s putter-like length and lie angle, the anti-rotational weighting makes it incredibly easy to swing with a pendulum motion.

Put another way: The blade is engineered to stay square to the target line, so wrist cock and good timing are no longer needed to hit a solid shot.

By moving mass to the toe, the designers achieved two more key enhancements. The Square Strike’s COG (center of gravity) is located precisely in the center of the clubface – and marked by a vertical line – while its MOI (moment of inertia) is higher than a typical wedge.

Result: The SSW delivers deadly accuracy on pure contact, and exceptional forgiveness on miss-hits. Test golfers hit shot after shot directly in line with the target.

The SSW’s low-profile clubface lacks the extreme curvature of a standard wedge, so it sets up dead-square to the target. To further aid alignment, the designers added vertical lines which frame the ball and guide the eyes to swing straight back, straight through.

Here’s sampling of the shots you can play with The Square Strike Wedge:

Yep, this technical marvel is an all-purpose problem-solver. 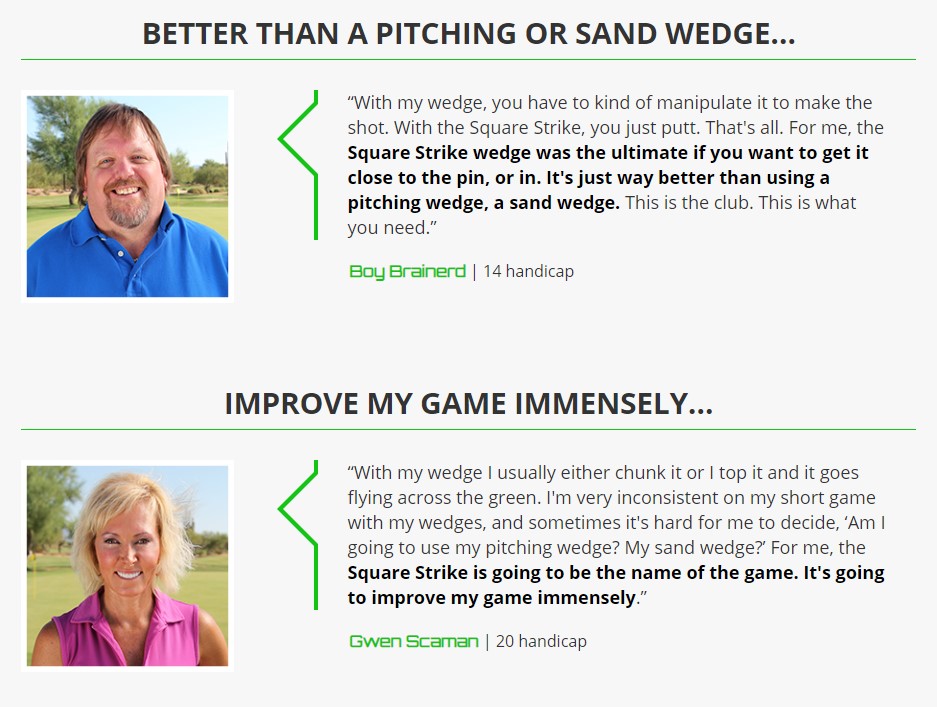 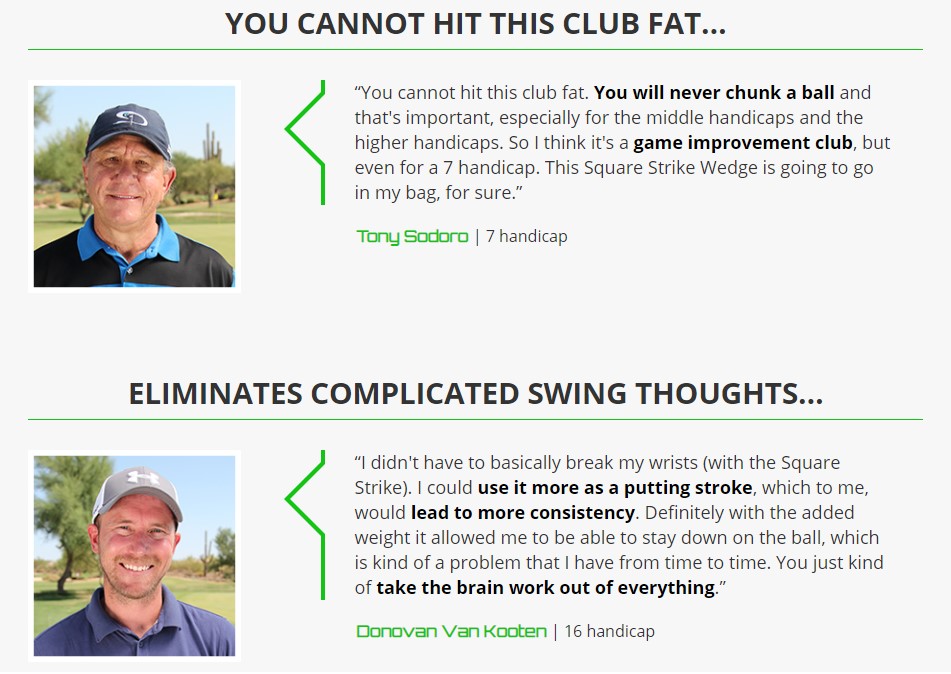 Why buy the Square Strike Wedge when you can just use your 7-iron for chipping?

The Square Strike Wedge is simply a more effective chipping club than a 7-iron – or any other traditional iron. Here’s what the SSW has that those clubs don’t:

If I add the Square Strike Wedge, which club should I take out of my set?

That’s the million-dollar question. In fact, the designers wrestled with it long and hard as they developed the club.

You’ve got a number of options. The most obvious is to replace one of your wedges – especially if you use one primarily for chipping. Perhaps you carry a lob wedge that rarely leaves the bag, or a gap wedge that mostly gathers dust.

Think about the other end of your set, too. Maybe there’s a hybrid or, God forbid, a long iron lurking just to cause you nightmares. Those clubs may well be costing you strokes. Why not pitch one in favor of the Square Strike Wedge?

A couple other ways to look at it: Replace the least used club in your bag, or the least effective.

Whichever club gets the heave-ho, you won’t regret the decision.

Will a left-hand-low or “claw” putting grip work with the Square Strike Wedge?

If that’s how you grip the putter, by all means do the same with the Square Strike.

Tester Henry Barrie had great success with his left-hand-low setup, while Frank Quinn excelled with his “claw” grip.

I advise you to experiment with different grip styles, including your regular chipping grip, to find what’s most comfortable and effective.

Can I play full shots with the Square Strike Wedge?

You can certainly hit shots making a full swing, though you probably won’t get as much distance as with your pitching wedge.

We recommend using the Square Strike Wedge for shots within 40 yards of the flag – that’s well beyond chipping range. But you may find that it work from 70 yards or more.

Does the Square Strike Wedge really work from bunkers?

Yes, indeed – I tried it myself and was amazed. While it wasn’t designed for bunker play, the SSW’s wide Anti-Chunk Sole glides beautifully through the sand. It’s great for longer shots where you need a low ball flight and lots of roll.

When I say the Square Strike Wedge is incredibly versatile, this is what I mean.

How do I know it’s not just a gimmick?

A few testers wondered that, too. Tony Sodoro was among the skeptics, but the 7-handicapper changed his tune after trying it.

“It's a legitimate club that's going to help your scoring and help improve your golf game,” Tony said. “You'll have more fun on the golf course.”

If that doesn’t convince you, how about this: The project’s lead designer, Josh Boggs, previously worked for one of golf’s biggest brands and crafted clubs that made Golf Digest’s prestigious “Hot List.” And while I can’t name names, Josh personally assisted some of the world’s top-ranked players in getting their sets just right.

Does the Square Strike Wedge conform to USGA and R&A rules?

Yep, it’s 100% conforming, which means you can use it in any round, tournaments included.

*Custom orders, including custom clubs, personalized balls and other items, are not eligible for expedited shipping.  There is a flat $15 shipping charge for all custom orders.

Our policy is to strive for the best possible combination of price and service for your shipment.

In order to better serve our guests, we will occasionally offer discounted shipping promotions. Any shipping discounts will be applied in your shopping cart.

Orders completed by 12PM CST (1PM EST) ship out same day! All other orders will be processed and fulfilled within one business day.  Orders must be placed by 12pm (CST) Monday-Friday in order to be eligible for that day's “Overnight” or “2-Day Air” shipments.

Austad's Golf is centrally located in Sioux Falls, South Dakota.  Most items ship directly from our warehouse there and average 3-5 business days for ground delivery.  See the map below for estimated ground shipping delivery times for your area. 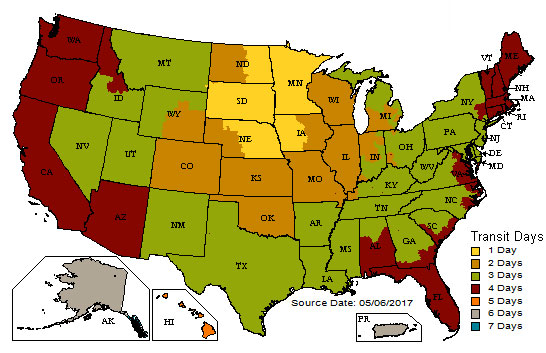 “Overnight” shipments will arrive the next business day (excluding weekends and holidays) after departing Austad's Golf. “2-Day Air” shipments arrive in two business days after departing Austad's Golf. On-time delivery for both methods is guaranteed by our preferred carriers.Shipping delays may occur during busy Holidays or in the spring -- we will do our best to accommodate last minute and expedited orders placed during these times.

UPS Next Day and 2-Day Air are available for customers looking to have products shipped to Hawaii or Alaska.

Unfortunately at this time, Austad's Golf only ships to locations within the United States.

Due to manufacturer restrictions, we cannot offer free shipping on any order with PING products.  Some oversize items such as cart bags, package sets and travel covers are not eligible for free shipping.

Austad's Golf has physical locations and charges sales tax on orders shipping to the following states: Iowa, Minnesota, Nebraska, North Dakota and South Dakota.  Orders shipping to states other than the five listed will not be charged sales tax.